Let me begin by saying that I love dating.

I love the awkwardness of being asked out, I love saying yes, I love the anticipation of a date night, the excitement of choosing an outfit and I love spending a few hours with someone new who is focused on getting to know me and then seeing what happens.

As someone who often learns a lot about people just by listening to them talk, one of my pet peeves in dating is when the date turns into an interview. I hate when it becomes obvious that a guy has a set list of questions that he asks every girl. But I find that this is happening more and more… so I have compiled a list of The Five Most Annoying Questions in Dating.

I’m sure there are many more, but these are the ones that I hear over and over again:

What do you do for fun?

Okay, I get it– you’re trying to get a feel for my interests, but I can assure you, I don’t categorize my life’s events under “fun” or “not fun”. I’ve never called my girlfriends and said “do you want to go have some fun?” So a question like that, to me, is very strange.

The other day Robert and I went to Bed Bath and Beyond because I wanted new curtains. They didn’t have what I was looking for, but we ended up spending a ridiculous amount of time in the store doing random things like sitting in the massage chairs talking and carefully selecting the perfect lint roller. We had a blast, but if I told someone that I go to Bed Bath and Beyond “for fun”, they would look at me like I was nuts.

I guess for me, it’s not what you’re doing; but who you’re with that makes life fun.

As a PSP of course I’ve wondered if guys who have been interested in me have dated big girls before, but I also know that finding out all of his exes are Beyonce lookalikes wont do anything but make me self-conscious. So, I dont ask. But I know that when the time is right, and if its relevant to our relationship… I’ll find out.

Why does it matter what kind of guys I’ve dated in the past? If you have me on an actual date, there’s one reason I’m there… You. So, if my last 12 boyfriends were NBA players and you happen to be 5’1, that’s irrelevant. Even if all of my exes happened to be loud and arrogant and you’re quiet and humble, its irrelevant. If the kind of guys I usually go for were what I needed, I would still be with them, so do us both a favor and give me space to discover something new in you.

Do you live alone?

Usually, when I’m asked this question I will respond “why do you ask?” to which the guy will say “I was just wondering…” But let’s be real, when a guy is inquiring about your living situation it’s probably because he’s trying to gauge how soon it will be before he’s in your apartment and more importantly your bedroom.

(The funny thing is, guys assume that girls who live with roommates won’t be as quick to invite them over. But I’ve definitely heard all of my previous roommates having sex at one point or another.)

This question just shows that a man is calculating how soon we’ll be hooking up, which is just tacky.

This question is a little different from “what kind of guys do you like?” I mostly hear this question when I’m dating interracially:

I’ve also heard it once when talking to a guy who was overweight:

Maybe my issue is just that I don’t like stupid questions. If you are Asian and I’ve agreed to go on a date with you, isn’t it a safe bet that your race isn’t important to me? I’m not going to go out with an Asian guy only to tell him “No, I do not like Asian guys.”

Why make me state the obvious?

And finally, Number One…

So, why are you single?

This question is #1 because it is so ridiculous!

My typical answer to this is pretty literal “I’m single because I don’t have a boyfriend.” To which the person who’s asked the question usually realizes how silly the question is. Then they all reply with the same predictable response “Well, its just that you’re so beautiful—I’m surprised no one has snatched you up yet.”

I don’t think guys realize that it sounds like an accusation. Why are you single? Why can’t you get a man? How come no one wants you?

What I do know is, I hate this question with a passion.

The crazy thing is– when men ask “why are you single?”, they all are expecting the same answer. You see I’ve gotten so very tired of this question that I’ve started to probe every man who uses it. I’ll ask, “What do you think is a good answer for a question like that?” and 100% of the time, these men offer the same response: “I just haven’t found the right one yet.”

So, if this is a script that has been played through a million times with no variety, why do they continue? And am I a bad date if I dont want to deliver predictable lines?

Anyway, these are my top five, what bad/offensive/awkward questions have YOU been asked?

It was 8am and my plane was boarding.

It wasn’t till I made my way past First Class (I’m not that fabulous… yet) that I remembered something I forgot to do before this trip:

Every time I travel on a plane I swear up and down that the next time I fly I will have lost ____ pounds figuring that if I loose enough, perhaps I will get on a plane and not stress about what seat I’m in and how comfortable I (and the people next to me) will be.

First I sit down, trying not to bruise my hips as they slide past the arm rests. I usually choose a window seat because the idea of sitting in the middle seat is just torture and while the aisle seems like a good idea, who really wants their arm banged by a soda cart? Not me!

Next comes the battle of the arm rest. I put it up, to give myself a little more space and 9 times out of 10 it stays there, but then there is that one passenger who tries to push it back down, possibly bruising my hip again! Sometimes they say “oh sorry” and put it back up, but sometimes they don’t… which leaves me traveling with an armrest cutting into me for hours (maybe the cart banging into my arm isn’t such a bad thing…)

And when I fly home to see my parents? Forget it! They live in a relatively small city and so I’m often on older, smaller jets with seat belts that rarely fit. This means that if the flight attendant notices that I am attempting to sit on/hide my too small seat belt, she will ask me to “buckle up” and then I will have to ask her to look in her little airplane closet and bring me… a seat belt extender!

Usually my Big Girl Rants are reserved for other people, but honestly this one is for me. Every time I travel I go through these things, but the person who has the power to change my experience is me.

I don’t have any travel plans involving a plane until the holidays, lets see if I can make the necessary changes so my luggage is the only thing stuffed into a plane.

Every November (just before I freak out that its December) I start casually looking at coats. Every year, I am disappointed. I look around at my slimmer girlfriends in their trendy, colorful coats and jackets, but when I shop around, I find either very warm coats with no style, or very trendy coats that wont keep me warm! I am on a mission for fashionable-yet-functional outerwear, but each year I see a lot of: 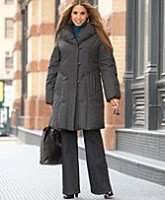 Bubble Jackets: These coats are super warm, but add inches to your body all around! When an NYC~PSP (New York City Plus-Size-Princess) like me is trying to casually wedge herself into a seat on the subway, every inch counts!

Pea Coats: Yes these coats are classic but with the shoulder pads and double breast design, they make me feel boxy and boyish… also, over the years I have had a pea coat in 3 different colors… I’m ready for something new! The same goes for the standard Single Breast Button Down Coats…

And while I’m at it, why do plus size coats only come in Black, Grey and Red? For once– I would love to see a pink, belted, cap sleeved, well designed coat in a true extended size (no more 3X’s that are actually a 14-16).

Now, while I still say the coat selection for a PSP leaves much to be desired, I did hit the jackpot twice this season. JoJo, my new pal from Luvin‘ My Curves recommended the Metro Leather Jacket from Avenue– I never shop there, but was quite pleased with this sexy piece… even my skinny friends covet this jacket (which I purchased in black).

Then last week, I was at Macy’s with a friend and ran across a really posh coat. With its high wide collar and silky leopard print lining, I was in love! I was shocked when I found out it was Baby Phat because I’m not a huge fan of that brand, sadly this image doesn’t capture how cute and posh the coat really is. I button the coat all the way up to the collar, which is built to stand just below the chin and the vintage shape it creates is just darling.

*Note: We are in a recession, so I’m not advocating reckless shopping, for me this coat was made possible by sales and gift cards!

Oddly both of my favorite outerwear pieces came from stores and designers that I usually ignore, perhaps I need to open my fashion net a little wider in order to catch the trendy looks that I crave. On the other hand I still challenge the plus size designers to start thinking outside of pea coats and bubble jackets.

My straight guy friends (yes I have a few of those) mentioned a “Butterface” the other day.

Butterface: A girl who has a bangin’ body… but her face…is a mess.

Now, I’ve always heard “You have such a pretty face!” which I eventually realized is what people say to Plus size Princesses.

Why not just say “You’re pretty”?

Why is it necessary to specify that I am only attractive from the neck up?

Does this make me a Butterbody???

And don’t even get me started on people saying “You have a pretty smile” which excludes everything but a Big Girls teeth!

If it were possible to have fat teeth, some Big Girls would never get compliments at all!