Below is my response to Jen Carons “IT HAPPENED TO ME: THERE ARE NO BLACK PEOPLE IN MY YOGA CLASSES AND I’M SUDDENLY FEELING UNCOMFORTABLE WITH IT” post on xoJane.com yesterday. Here is an excerpt of what she wrote:

A few weeks ago, as I settled into an exceptionally crowded midday class, a young, fairly heavy black woman put her mat down directly behind mine. It appeared she had never set foot in a yoga studio—she was glancing around anxiously, adjusting her clothes, looking wide-eyed and nervous. Within the first few minutes of gentle warm-up stretches, I saw the fear in her eyes snowball, turning into panic and then despair. Before we made it into our first downward dog, she had crouched down on her elbows and knees, head lowered close to the ground, trapped and vulnerable. She stayed there, staring, for the rest of the class.

Because I was directly in front of her, I had no choice but to look straight at her every time my head was upside down (roughly once a minute). I’ve seen people freeze or give up in yoga classes many times, and it’s a sad thing, but as a student there’s nothing you can do about it. At that moment, though, I found it impossible to stop thinking about this woman. Even when I wasn’t positioned to stare directly at her, I knew she was still staring directly at me. Over the course of the next hour, I watched as her despair turned into resentment and then contempt. I felt it all directed toward me and my body.

Now, I’d like to share my story… IT HAPPENED TO ME: I’M A BIG BLACK GIRL AROUND SMALL WHITE PEOPLE & I’M SUDDENLY FEELING UNCOMFORTABLE WITH IT (a response to Jen Carons)

Before class began we all introduced ourselves. There was a Kristy, a Liz, a Lisa, some other names I can’t remember and me, CeCe.

For the duration of the class, our bubbly blonde instructor encouraged everyone by name, “Nice Kristy!”, “Good job Liz!”, etc. she would also encourage me “Go, Girl!” she’d say… “Alright, Girl!”… “Nice, GIRL!” she’d yell standing over me with a beaming smile.

Jen Carons account of being made hyper aware of her white-ness and her skinny-ness while in the presence of a big black woman resonated with me because I am in that situation regularly, of course I play the role of the confused black woman who doesn’t understand why people constantly talk about their color and size when they’re around me.

Can you imagine what it would be like to have people make announcements about the color of their skin or the size of their body every time they saw you? Welcome to my world!

Like when white men grab me to dance at a bar and then interrupt our fun to announce “I’m such a white boy, right?”

Or when small white women wistfully tell me how much they really wish they could gain weight and be more “curvy”.

You see, from where I sit Jen’s sudden awareness of her whiteness was only a reflection of how hyper aware she was of the big black woman in such close, intimate proximity to her.

I mean, it would be weird to say “OMG! You’re so big and black!” so instead she says “OMG! I’m so white and small”

As a plus size woman of color, people are constantly “telling on themselves” in regards to how they see me. It could be as simple as calling me “girl” instead of my name or being shocked when I sing along to Incubus songs, it could be something as nuanced as mentioning their own appearance in contrast to mine, or as awkward as quoting Tyler Perry to me and assuming I’ll get the reference (I won’t).

If Jen Caron would like to think about how a big black girl feels, she can think about one of my realities: I’ve come to accept that for many of my associates, I am a big black woman for a very long time and then once they get over their own stereotypical interpretations of what that is, I become a person named CeCe.

I do give Jen credit for trying to put herself in my shoes though, she said…

I thought about how that must feel: to be a heavyset black woman entering for the first time a (yoga) system that by all accounts seems unable to accommodate her body. What could I do to help her?

The answer to that is easy, I don’t need your help… I’m good! 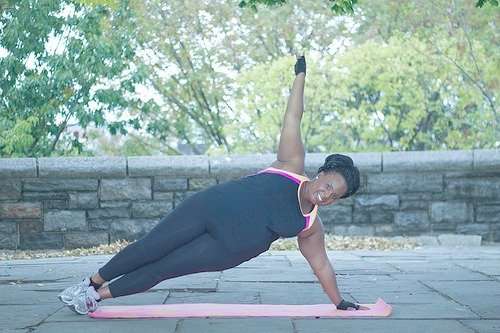 551 thoughts on “IT HAPPENED TO ME: I’M A BIG BLACK GIRL AROUND SMALL WHITE PEOPLE & I’M SUDDENLY FEELING UNCOMFORTABLE WITH IT (a response to Jen Caron & xoJane.com)”