One of the things that really stuck out to me in last week’s #CurvyConvo question and the comments that followed, is that our girl knew that a man asking her to lose weight before he dated her was a red flag, but she still considered it.

Some girls wondered why she would even think about giving this guy a chance, but I understood where she was coming from. I’ve been there. Being single is hard, craving connection with another person and not getting it can be painful and frustrating.

Before I met Mr. Man, I can remember trying to make it work with guys who weren’t good for me, just because I just wanted to have someone in my life. I remember ignoring dating red flags because it just felt good to have Friday night movie plans.

We can know in our minds that we’re worthy of healthy fulfilling relationships, but sometimes in order to avoid lonliness, we settle for just any ‘ol body. Usually those are the dating situations that leave us more emotionally bruised/empty than we were before. (p.s. After making the wrong choice a few times, I can confidently say that I’d rather be lonely than date a jerk). 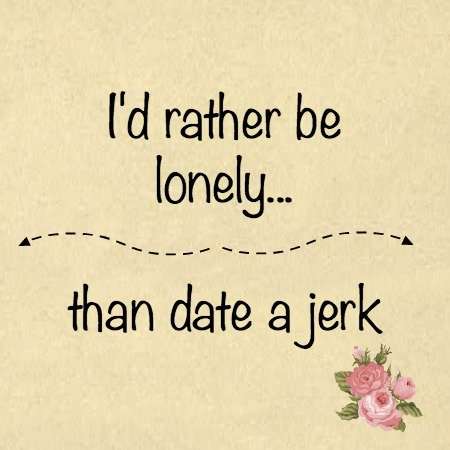 Last night, during our #CurvyConvo, Live we discussed plus size dating, self love, body image and setting standards/keeping them. I’m wondering if maybe we can all commit to doing that? What are your thoughts on lonliness vs. mediocre dating?

The entire chat was 45 mins long and you can watch it here. You can RSVP for the next #CurvyConvo here.

In the meantime here’s a shorter clip on dating “Set Your Standards & Stick to Them”.

28 thoughts on “I’d Rather be Lonely than Date a Jerk… Thoughts??”