Disclaimer: This is a subject I’ve wanted to write about for a while. I look forward to hearing your thoughts, but anything offensive or hateful will be deleted.

We’ve talked about how women of certain races are almost expected to be curvy/thick/bigger, but what if your ethnicity was expected to be tiny… and you weren’t. If I asked you to describe what an Asian woman looks like, what would you say? Words that would come to mind for me right away would be: small and petite. The words “small and petite” definitely do not come to mind for Plus Size Princesses, but there are plenty of Asian PSP’s in the world.

I don’t think we can continue our size & race discussion without talking about the experience of being Plus Size and Asian. I am not Asian, but I’ve heard people make ignorant comments like “I didn’t know Chinese people could get fat” and I’ve had conversations with some Asian TBGB readers about the pressure that comes from their family to lose weight.

We all know that being overweight can make you feel like the odd-girl out, but if people look at you and assume that you should be thin because of your background, it can make that feeling more intense.

As I thought about this subject, I reached out to Allison Teng from Curvy Girl Chic. Allison is one of the most adorable Plus Size Fashion bloggers around and… she’s Asian! I thought bringing her into the conversation would be a good way to hear from a PSP who understands more than I ever could! 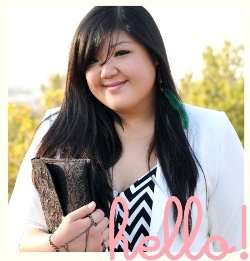 Allison and I had a long email exchange and she was super open and honest, so I thought I’d just share our conversation with you… here goes!

CeCe: So, when it comes to being Asian and +size, what has your experience been?

Allison: Being plus size and Chinese/Taiwanese really wasn’t that tough when I was younger. I was just another fat kid, if that makes sense. Race didn’t really factor in. It wasn’t until I went back to Asia that it really hit me just how large I was compared to ALL the other people. EVERYONE in Asia is tiny (skinny and short!).  Sales people don’t just ignore you like they do in the US. They STARE. So unnerving.

CeCe: Wowza! How about your family? Are they supportive of you? Do they pressure you to lose weight?

Allison: My family is AWESOME, and relative to other traditional Chinese families, extremely forward-thinking. Still, having them accept my size was kind of a growing process. I’m lucky though, that they’ve always focused on the health aspect of weight, rather than losing weight just to be skinny. I know they worry and nag because they care. And I can live with that. My extended family, on the other hand, is MUCH more traditional. I’m pretty sure I’m the largest person my grandfather has ever laid eyes on, and the last time I saw him in Taiwan, the first thing he was to me (in Mandarin) was “Wow! You got even fatter?!” …seriously. I’m pretty secure in myself, but that definitely threw me for a loop!

CeCe: LOL @ being the biggest person your grandfather has ever seen. Fat is such a different concept in other countries. I’m Nigerian and when we went back my cousins were like “you’re fat” this and “you’re fat” that… I’m like dying inside because americans don’t talk about weight so bluntly. They didn’t mean harm, to them its just the truth!

So, now for the juicy stuff lol! What’s your dating life been like?

Allison: When I was single, you can bet that Asian guys NEVER hit on me. Everrrrrr. I live in one of the most densely Asian cities in Southern California, and when I have received male attention, it has N-E-V-E-R been from an (East) Asian guy. The attention I got was always from hispanic, black, or middle eastern guys, never white or east asian guys. But now I’m with my ever-so-awesome boyfriend now (he’s half-white, half Vietnamese).

CeCe: Awwww… Hooray for awesome boyfriends! Do you have any general words of advice for Asian PSP’s?

Allison: My advice to big girls in the Asian community is the same advice I give to big girls everywhere–don’t waste time comparing yourself to others! I’m never going to be that skinny, pale-skinned Asian girl with stick-straight, long dyed hair and big anime eyes, but that doesn’t matter! Focus on doing things that make you feel good about yourself. As hard as it is, try to filter out the negative media and instead, focus on whatever make you happiest.

Be sure to follow Allison on twitter, say hello and tell her that CeCe sent you! (@CurvyGirlChic)

So now its YOUR turn to chime in… we’d love to hear your general thoughts or you can answer these questions:

Are you an Asian PSP? If so, what’s your experience been like? If you’re not an Asian PSP, do you find that you assume things about other cultures when it comes to their weight?

81 thoughts on “Size & Race: Being Plus Size and Asian”