Ever since the thermometer rose above 55 degrees I have been annoyed. I like warm weather, I like wearing little dresses and hanging out in the park. What’s annoying me is that when the weather gets warm, all of the couples in New York City decide to come out of hiding.

When the summer comes, suddenly the city is flooded with pairs of people holding hands on the street, cuddling in the subway and dry humping in the park (no, seriously… I’ve seen it and its not cute). I had to wonder where these couples were during the coldest parts of the year. I mean, when I slip on a cute outfit and then cover it up with three layers of clothing just so I can trudge through the snow to meet my friends for a drink, the train is full of small clusters of single people doing the same thing.

Then I realized that couples don’t go out in the winter because they don’t have to! They stay home. Alone. Together.

Maybe that’s why, when they make their warm weather debut, they are beyond excited to rub it in my face show their coupledom to the world. I guess anyone who’s been inside their apartment since November would be a little overzealous to take their love to the streets and in theory I understand that, but as a single girl in New York City, it makes me sick! 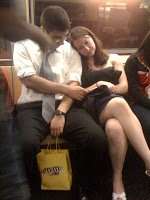 The other day I rode the 2 train from 14th to 72nd street sitting across from a couple who was happy just to play with each others fingers and a fit of rage (and maybe jealousy) took over me. I found their simple affection nauseating and unnecessary even though I love love! I’m happy when my friends find someone and when I see people making each other happy. But these first few weeks of warm weather have been brutal for a girl who isn’t in a relationship.

I had to ask myself if it was the couples that were annoying me or the fact that I’m not in a relationship that’s driving me nuts. I have to be honest, I think its the latter. If given the chance, I would probably be one half of an obnoxious summer couple in a heart beat (minus the dry-humping, ’cause that’s just weird). After all, I shave my legs every other day during the summer and it would be nice to know that at some point someone was going to touch them.