Parasailing is something I’ve wanted to do for a while, and I figured Miami would be the best place to try it out. I can be a little anxious about things and I started having visions of me standing on the beach being told that I was too big to be flown over the ocean. Even though I did lots of research to make sure my weight wouldn’t be an issue, I still had nagging thoughts that it wouldn’t work out.

I called two parasailing companies and Miami Beach Parasail was the one that seemed to really have it together. The guy I spoke to on the phone was quite helpful and their website answered a lot of my questions, so I decided to use them.

My girlfriend Lucia said she wanted to come along so we made our way down Collins avenue from our hotel to the beach behind the Lowes hotel where Miami Beach Parasail is based. As we approached the big red umbrellas under which we could sign up to sail, my heart started beating faster in my chest. Here were my top three fears:

We were immediately greeted by Camille, who gave us waivers to sign and took care of our package arrangement. Camille was super friendly, talking to us while we waited for our turn and easing us of our fears, “I still get nervous even though I’ve done it a million times, you’ll be fine though!” she told us with a smile. A few minutes later it was our turn to go up. We stripped down to our bathing suits (good thing I had gotten more comfortable with that) and one of the boat operators handed me a life jacket. I slipped it on and he helped me zip it up with no problems (whew!).

Once we were suited up, it was time to go out into the ocean. They led two other girls, Lucia and myself into a small speed boat where we sat on the outer edge and held onto the ropes so that we wouldn’t flip off into the ocean. Lucia and I were both silent with nerves as our boat skipped over the waves like speed bumps. A few minutes later our smaller boat pulled along side a larger one where the parachute was floating hundreds of feet above. The waves threatened to knock us off balance as we climbed onto the deck of the bigger boat, but we made it. 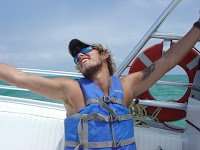 Lucia and I let the other girls go first and as they floated above the ocean we started talking to Kyle, one of the parasail operators. Kyle was hilarious and talking to him helped me forget I was scared. When I told him I was going to write about this in a blog for plus size girls, he asked if he could say “hello” to you all, so here he is! (cute, right?)

After our impromptu photo shoot, Kyle pulled out the harnesses so that he could attach us to the actual parachute/rope contraption when it was our turn. We stepped into the leg harness like pants and then he clipped it around our waist. Again, I was nervous that things wouldn’t fit, but everything slid on easily. Soon it was time to go into the air. Lucia and I giggled nervously as we sat on the nose of the boat and before we knew it we were floating in the air. Being on the boat you feel the waves and motion of the ocean, but when you’re parasailing its the most calming thing. Its indescribable. Lucia and I went silent again, this time because we were in awe of what we were experiencing.

We spent a really long time in the sky and they took pictures of us (that’s me up in the air!)

Right before they reeled us back on the boat, they lowered us into the ocean, dipping us into the water up to our waists. When we got back onto the boat, Lucia and I could not stop grinning. “How was it?” Kyle asked. “Um… AWESOME!” I replied and I meant it. Parasailing was the highlight of my vacation, and all of my fears about doing something extreme as a Plus Size Princess were gone.

As I was unpacking last night, I got a text from Lucia that said I can’t believe we went parasailing! the fact that we’re both thinking and talking about it days later speaks volumes about the experience.

What do you think? Would any of you consider parasailing?